A few days before the release of the new Ubuntu, here’s a guided tour through the Ubuntu family album with some annotations telling my story with the different versions.

The first version of the Ubuntu distribution. For the history it was during a discussion between Robert Collins and Mark Shuttleworth that Mark has launched the name that will be adopted and adapted to any future versions of Ubuntu. Thus each version will have a code name composed of an adjective and an animal name.

March 2006 – The first time I heard about Ubuntu: One of my students brings me a bag with two original CDs, an installation CD and a live CD, and he tells me he got the CD free and they are sent home by mail at no charge.  I take the live CD, I  go  home, but I can not find an equivalent to my very useful “Drakecenter” to configure the settings for my PC. I give up and I return to my sweet Mandriva.

November 2006 – The first time I install Ubuntu: I am in training in France, I was given a PC and allowed  to install my own OS. I take my Mandriva DVD and begin the installation, but can not complete the installation … the system does not detect the SATA disk of the PC. A colleague hands me a CD written on “Ubuntu 6.06” and asks me to test it.  I install the system and presto, SATA disk detected and I find myself with my new GNOME desktop, all in brown and orange icons while. My colleague tells me that tomorrow will bring me the CD of the new version just released a few days ago and tells me that the new version brings a huge number of improvements.

November 2006 (continued): My colleague brought me back the CD, and presto new installation within 24 hours. During the installation my colleague introduced me to a spirit of this new distribution, its history, its advantages over others, etc.  The installation is complete, the hard work starts: how to configure my machine and how to install my applications without my famous “Drakecenter”?  With an internet connection available, my first (good) reaction was to ask my best friend (at that time – I mentioned google) to help me and obviously I found the website of the Francophone community. There a very big surprise…  the documentation  is freely available,  forum registration is possible and it is free… (I say it was a surprise because at that time subscribing into the official forum of Mandriva was not free) long life to the free spirit, I am fascinated by this community and I joined it directly. Since that time I have not left my Ubuntu.

April 2007 – Community: I’m getting my bearings in this new distribution after years spent with Mandrake and Mandriva, and my “Drakecenter” (yes I repeat: p) don’t miss me more.  Thanks to the forum and the documentation of the Francophone community all my questions (or almost) are answered. I discovered the concept of community and of course my first question was is are there a Tunisian community? Yes there is one, and it is two months old, but with no apparent activity (for now).

October 2007 – The community (bis): More and more e-mails circulating on the mailing list of our community and IRC meetings are held from time to time.  Few days after the release of Ubuntu 7.10, ubuntu-tn  community participates in the biggest FOSS event in Tunisia “Software Freedom Day – SFD”. Our community is within the landscape of FOSS communities in Tunisia and became one of the main actors.

The second version with a long term support, as the first LTS version the code name uses a name of a bird. For me it is the version that has the most beautiful wallpaper by default

but not only that.

April 2008 – Purpose, approval of the community: Our community turns on more and more and we set a common goal: become an approved local community.  The goal was reached July 22, 2008.

The Jackalope, an imaginary animal, had to find it 🙂

Ubuntu in the clouds.

and the story history will continue with:

The Meerkat light and social.

To review and use older versions of Ubuntu: The Ubuntu Museum

A free adaptation of the article “A Look At All Ubuntu Mascots (Code Names)“. 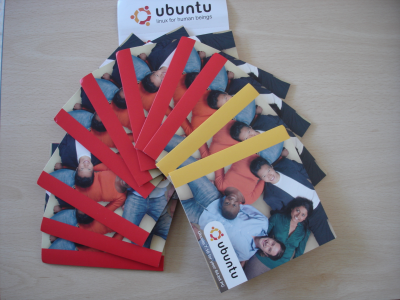